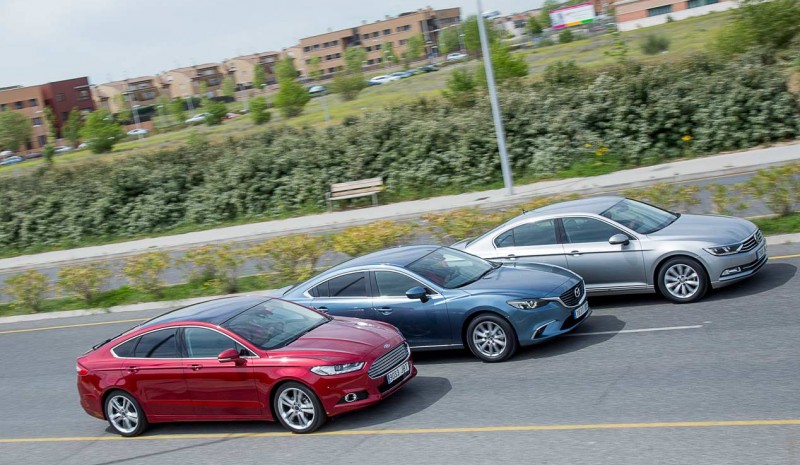 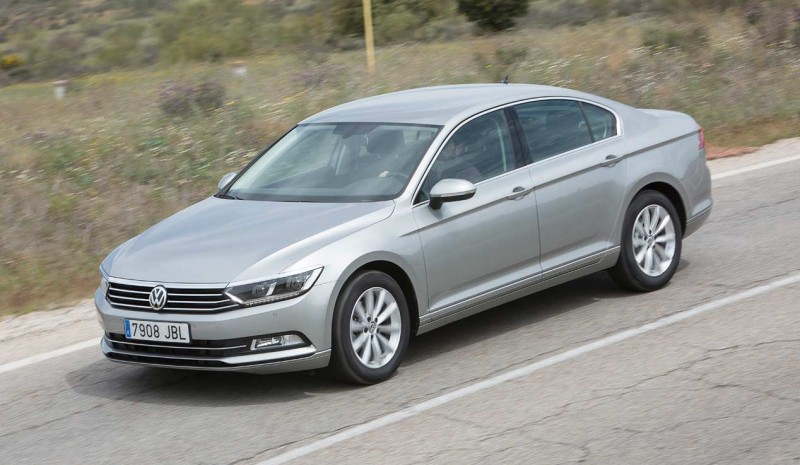 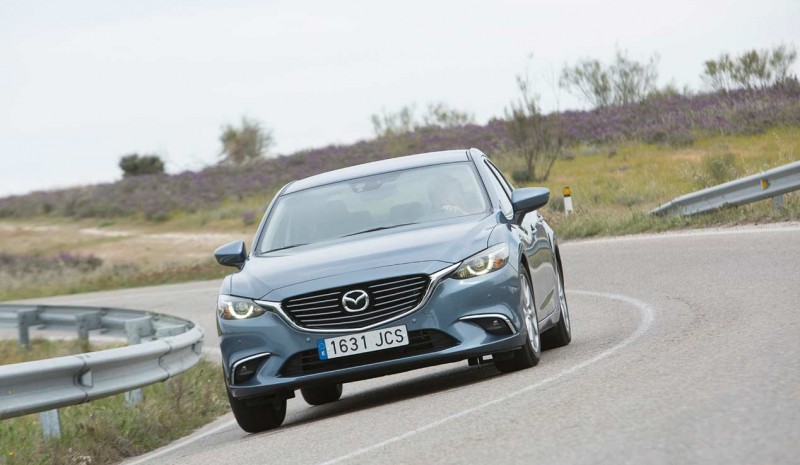 This year, now reaches its Ecuador, has meant for this segment the arrival of two heavyweights: the Ford Mondeo and the Volkswagen Passat. And both have innovative gasoline engines, if we do many thousands of kilometers a year, can be profitable, not only economically, but also entertain us when with a refinement that the turbodiesel, even remotely, can reach. First of all we want to make clear a consideration: if in the past three representatives of these brands could be considered "sons of generalists" today, its production quality, equipment and general operation, allow them not begrudge even in some cases would be contrary to the vehicles theoretically considered "premium." 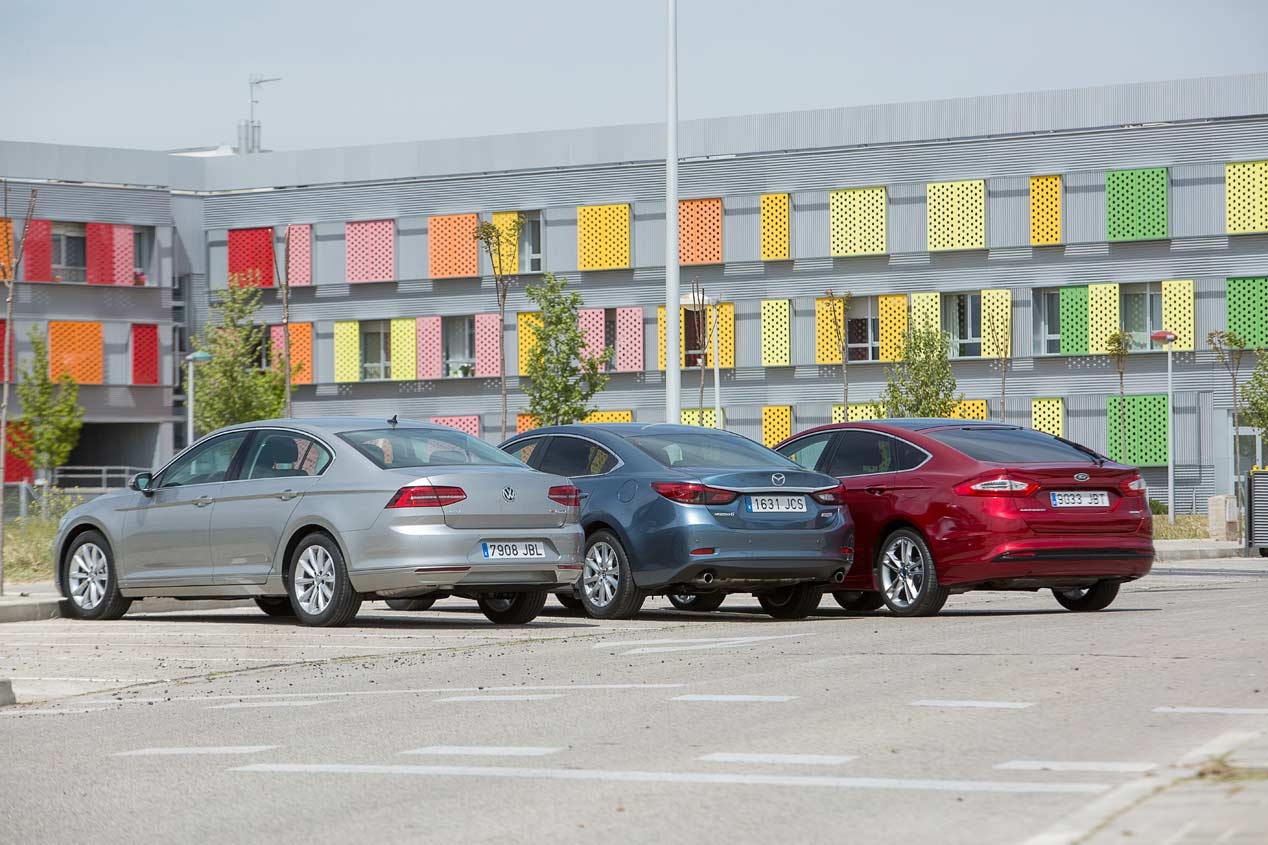 In the two newcomers we find interesting thrusters under their bonnets. At Ford Mondeo an EcoBoost 1.5 liter is, supercharged direct injection and turbocharging. Its 160 hp approved have been very short when we have placed on our chassis dynamometer, exceeding 180 even. In the case of Volkswagen, the "downsizing" is even more radical, lowering the engine to 1.4 liters. But the most interesting thing of this engine is the possibility of automatic disconnection of two of the cylinders when driving patterns make it advisable. By a message on the dashboard, the driver knows when the engine uses half of its cylinders, so that even with a little skill can influence this thrifty ingenuity. Meanwhile, Mazda maintains the traditional architecture, with two liters and air power, as in the old days.

This lack of supercharger it might seem that the Japanese model placed at a disadvantage against rivals but, once you have passed all three by our dyno figures belie. In fact, he Mazda 6 jumps dramatically from 145 hp approved a generous 162, while the Passat only seven less than the approved amount, standing at the gates of the 157 hp. The Mondeo, meanwhile, appears to have suffered an assembly error and enjoy the switchboard another version, then escapes to a stratospheric 188 hp. Despite its significant growth in performance, Mazda engine if you notice your breathing air with a weaker response at low engine speeds. Torque figures testify to this, because at 1,500 rpm generates just over 16 mkg while the Mondeo reaches 20 and Passat flies over all, exceeding 27. This does not mean that it is unpleasant, far from it, of the three, Japanese is the smoothest and accepts that best performance in the environment of idling in gear. If we lived in a past time, it would be interesting to see which of the three high-rate reacts better, but today this is secondary. Still, you will witness Ford is the most ebullient who comes to the red zone on the tachometer, followed by Volkswagen and Mazda, both very even.

The translation of the respective yields the stopwatch is not linear because a destabilizing factor, which is the weight appears. If power off, the faster it should be the Ford. However, it is not. And is that, with respect to Mazda 6, for example, almost 200 kilograms of difference and over 170 on Passat. The result of this equation indicates that Volkswagen is the most dynamic of the three, followed closely by Mazda and Ford. In any case, the differences are perceived, especially when overtaking, because the rest of the measurements are difficult to move traffic on the open road. And unfortunately for Mazda in this maneuver it turns out to be less bright.

The weight factor also affects another important chapter consumption. And how could it be otherwise, the Mondeo is the most conditioned, with our average consumption figures than two liters Mazda, whose engine is extremely austere, without "downsizing" or overfeeding. Not far behind, Passat gets the brilliant figures of expenditure, but it is surprising that the environment where it should show its best-the road- potential, most often acting cylinder disconnection, almost one liter left behind the Japanese model. The Mondeo, certainly somewhat affected by its higher weight, get figures that ten years ago would be brilliant, but times and science advance outrageous and, today, it is not.

Market trends in recent years have led to a saturation of driving with turbodiesel engines. For this, again enjoy this size sedans powered by gasoline refineries is revealing. No noise or vibration level diesel siblings. Suddenly, three models of just over 25,000 euros price we crave Class S.

If we are not inveterate wheelers, versions like these are more than recommended. In particular, This Mondeo Titanium dazzles. His imposing presence, do not forget that approaches 4.9 meters long, successful and impressive aesthetic -has support area wheelbase and wider tracks of the three of them make their roll in stately. It is the softer suspension and to compensate, It has a superlative directional capability. While at first it has to get used to not face the inside shoulder of the curve.

Passat and Mazda 6 offer a more natural balance between performance and comfort. Its dynamic driving is more intuitive and do not surprise the driver with excesses in any of their reactions. In any of the three we are well served in active safety, although Ford is braking more effectively and also has electronic aid packages had already wanted the Apollo XI on arrival at the moon.

Travel on any of our players is really a pleasure. Space everywhere, generous equipment and insulation impeccable road and air environment. Its design, would emphasize the Mondeo, for their excellent seats and elegant environment. The Passat shows a rectilinear design, which subtracts hidalguía and the front seatbacks show overzealous in the task of aquilatar weight. Mazda, as the Mondeo, commits the "recklessness" of not offering the standard browser and offer optional equipment is shorter than its rivals, leaving no possibility for more retailers to adjust your unit to your own taste .