In the eighties, opening car imports made aumentasen purchase options … even within the same dealer. It happened with the Audi Coupe GT and VW Scirocco. What a match! 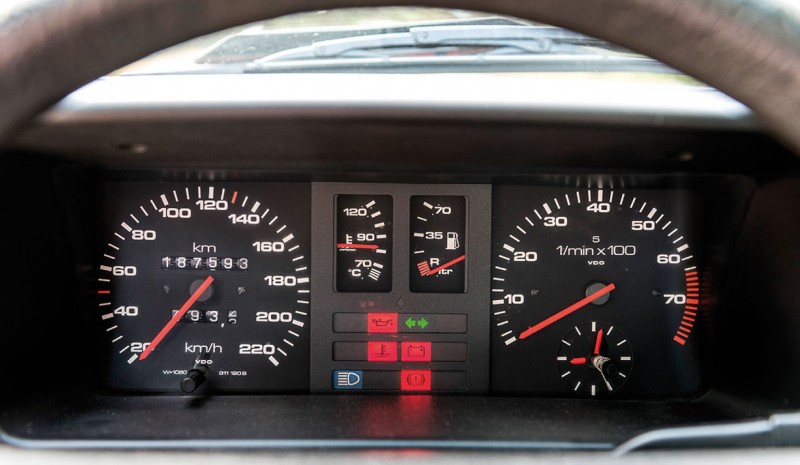 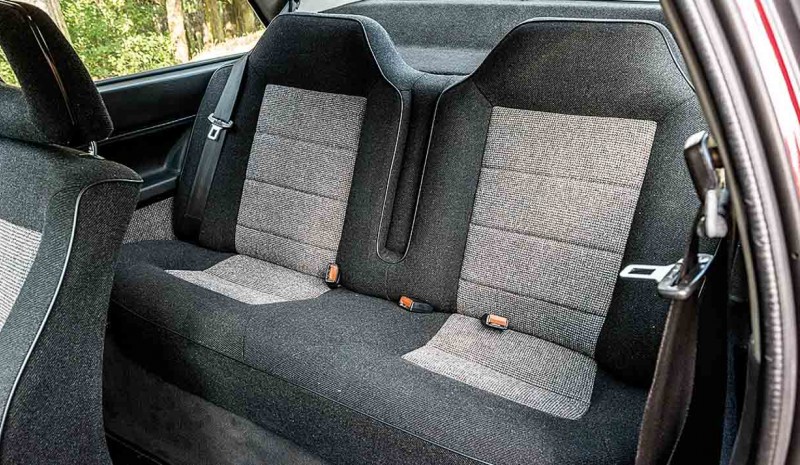 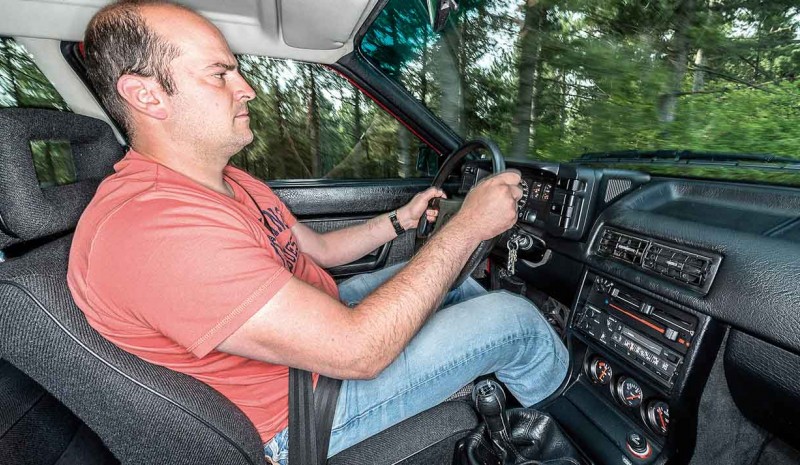 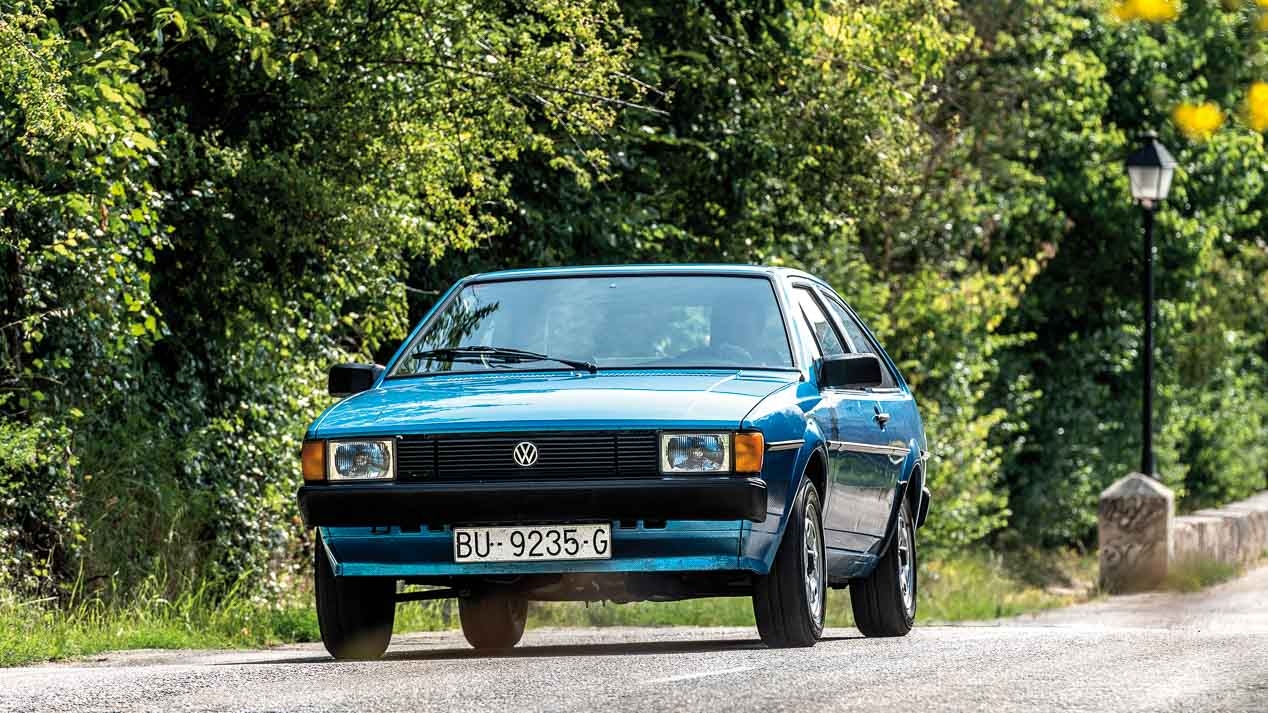 ran 1983 and advancing the relationship between Seat and Volkswagen. That year they began assembling in Barcelona first VW Passat, while Seat dealers They had already begun from January 2nd sale of Audi and Volkswagen import. 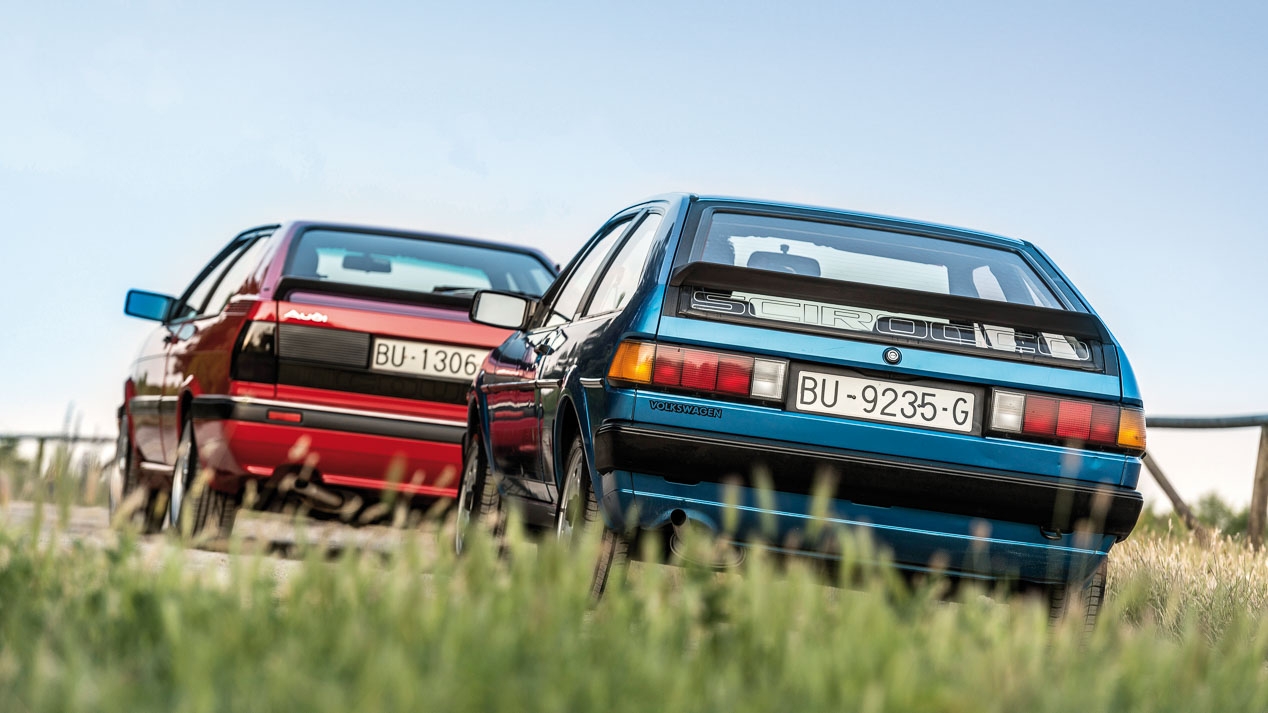 At that time, Audi lived moments of sport and commercial glory. On the one hand, its new sedan Audi 100 had just received the title of European Car of the Year, By careful termination and aerodynamics of its body (Cx 0.30). And on the other, the absolute victory of the Audi Quattro in the World Rally Championship 1982 influence in successive years for the rest of the World cars were all-wheel drive.

In this context, the presence of Audi models in the extensive network of dealers Seat helped the public had better brand awareness. Likewise, the lowering of tariffs was becoming more accessible cars from other countries. While still higher than domestically produced cars price, increased desire to buy foreign models, the real possibility of doing so and the desire to access more vehicles than the Spanish packaging manufacture.

A great example of this was the Audi Coupe, He presented at September 1980 like a simple variant of the revolutionary Audi Quattro. Provided with drive to the front axle, the primitive offered in coupe versions engines four or five cylinders in line, with the advantage that their prices were less than half the Quattro. Already in 1984, the Audi Coupe was the subject of an aesthetic remodeling, affecting body and interior design. Red unit we show is imported and registered in April the following year. The burgalés bought a doctor, who paid around 3,100,000 pesetas. Such an amount three times the cost of one Seat Ronda Crono and doubled the price of an Opel Kadett 1.6 SR, also import, but in return the Audi offered a high ride comfort and superior performance.

Left the table Giorgetto Giugiaro design, rectilinear style Audi Coupe meets the standards of the time, although somewhat softened the front lines renovated in 1984. Thanks to its forms, in the cabin there breadth four basketball players. He sacrificed, however, is the trunk, whose lid opens from the driving position but which-structurally pro rigidity can not be expanded. Who measure more than 1.75 meters find comfortable in the cockpit, where the general feeling is of being on board a comfortable saloon … except finding in the rearview poor rear visibility. 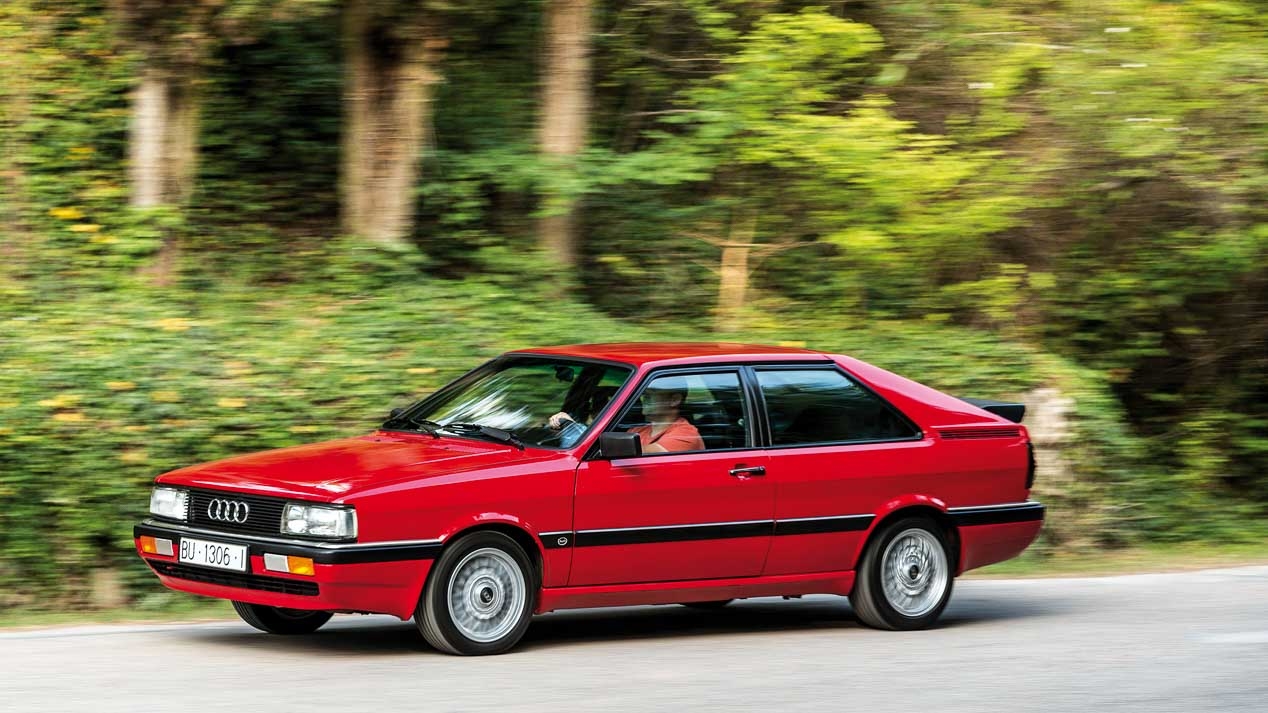 When starting, protrudes fineness five-cylinder engine of 2,236 cm3 and 136 hp This Audi Coupe, you can hardly hear. Already underway, power steering facilitates maneuvers to slow and relaxed pace on fast roads, letting the engine musicality become the protagonist. Not only that, but his drive, braver than expected thanks to empty weight of only 1,060 kg. Not surprisingly, it is easy to spend inadvertently existing limits, by the silence of mechanics and sound insulation. Otherwise, in areas tacks comes out the comfortable character of this Audi Coupe coupe GT. With the longitudinal axis hanging in front of the propeller, this front-wheel drive takes roll during cornering and tends to understeer.

For his part, Volkswagen Scirocco GTS of the images is registered in April 1983. It is therefore one of the first copies also distributed through the network Seat and in fact card industry is dated January 4, 1983.

It is the second model series, whose sale began in May 1981 and in Volkswagen is known by the internal code 53B. Unlike the first series, which was designed by Giugiaro, the new VW Scirocco was created in Wolfsburg, where they were able to give an innovative air hood wedge and large glass area. Y in contrast to the selling Golf, Scirocco function was to satisfy those who wanted a sporty coupe mood, in exchange for losing the polyvalent approach mate range.

With respect to its predecessor, this series of VW Scirocco had a body 165 mm longer and 30 mm was shortest, both features that improved aerodynamics and demeaned its center of gravity. Also, the new Scirocco It was manufactured in the Karmann factory in Osnabrück, where he applied a careful rustproofing. In addition, the new range had a much more complete equipment, including standard or optional accessories such as air conditioning, power windows, alloy wheels, moonroof or leather upholstery.

In the spring of 1983, version VW Scirocco GTS It was the only one offered in the Seat dealers. his price of 1,708,000 pesetas, It was consistent, but the possibility of buying a Golf GTi for only 8,000 pesetas more made few people get interested in it. And also it had more suggestive competition and lower priced alternatives, such as Ford Escort XR3i (1,527,000 pesetas) Or Renault Fuego GTX (1,582,000 pesetas).

Simple front, which emphasizes the single-arm wipers, side view VW Scirocco is more striking by the dynamic profile body and the lower spelling GTS, fashionable at the time. Watching him from behind the personality is the spoiler, almost a foot above the base of the rear window, the Scirocco legend and the headlights as horizontal.

Must be agile to crouch and sit behind the wheel. But once adjusted the seat, each control appears to be in the right place in a post functional driving without striking details that the shift knob shaped golf ball and steering wheel with four central circles, ordered any of them actuate the horn.

The Leadership requires muscles to turn it stopped, but as we are moving becomes accurate and reports what happens. According accelerate and we are changing gears, light weight (855 kg) Becomes an ally when accelerating in the first three gears. Once on the road, hardly inclined body and low center of gravity provides superb performance. Scarcely understeer, the VW Scirocco is more effective than curved Golf of the first two series, which for that has a lower body. 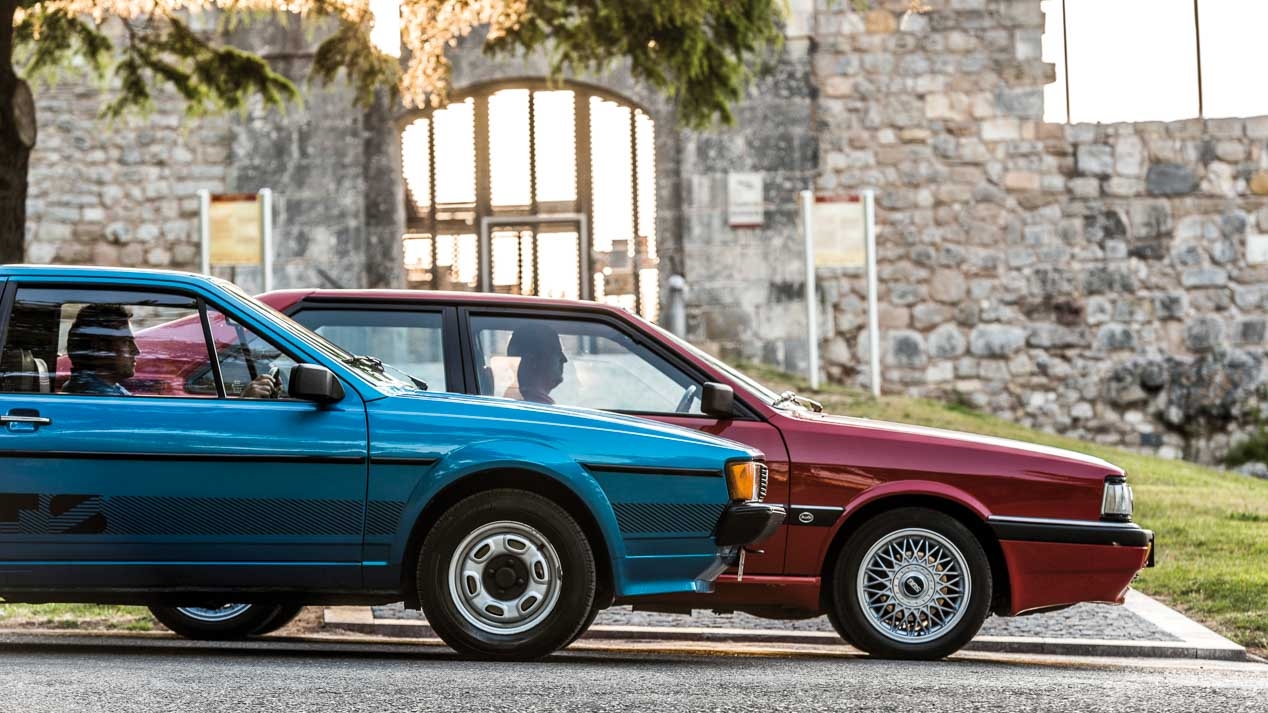 Moreover, the humblest 4-cylinder engine, 1588 cm3 and 85 hp It has a progressive response and turns up with joy. Remembering that time gearbox 4 + E with a fifth long (35.62 km / h at 1000 rpm) designed to consumption was reduced at constant speeds. For this reason, the maximum speed is achieved in 4th, with the engine above 6,100 laps. Further, on the board there is a charge ecometer two functions: A yellow light comes on to warn the driver of the move to the next relationship … if we spend less gasoline and a needle that indicates the instantaneous consumption as progress is geared E. “You can do 500 km with thirty five liters, “says its owner, provided that the cities are avoided and do not go over 120 km / h. Of course, it is not bad for a thirtysomething coupe engine capacity.

In short, it is clear that both coupes were intended for a different clientele. Youth and Sports of the Volkswagen Scirocco, more mature and eager to comfort the Audi Coupé. The key was that each brand had a different model to not walk competing with each other. Which do you choose?

That was the Toyota Celica Carlos Sainz

That was the Kadett GSi Opel