The Audi RS2 was one of the most amazing and captivating creations of all time. With the seal of Porsche won a whole generation. Do not miss our 1994 test. 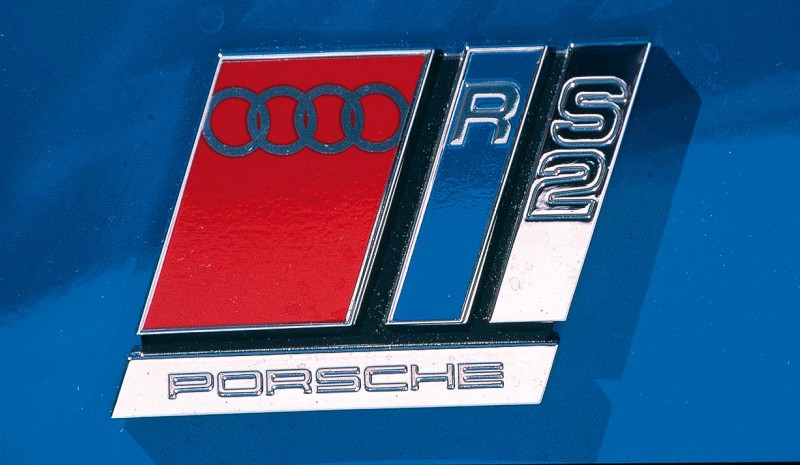 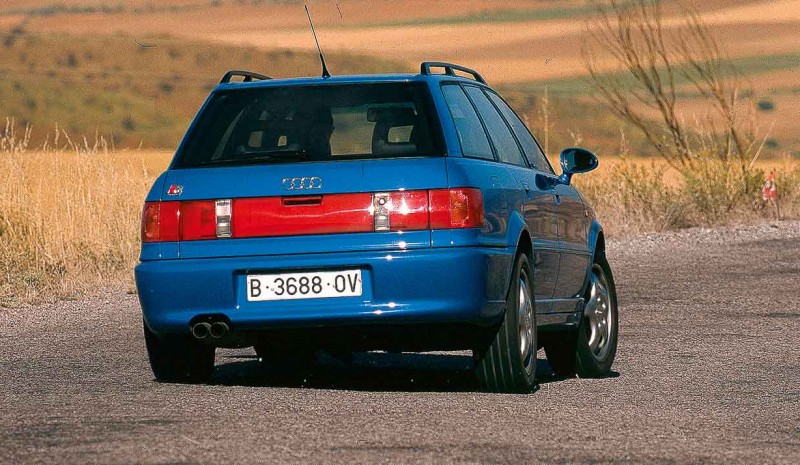 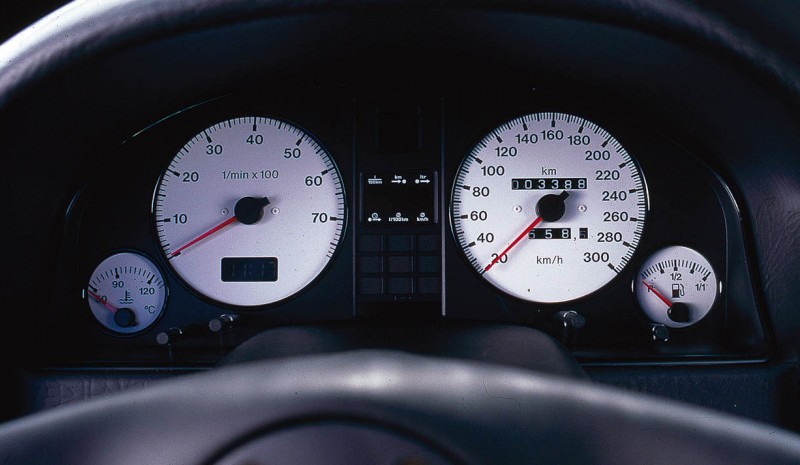 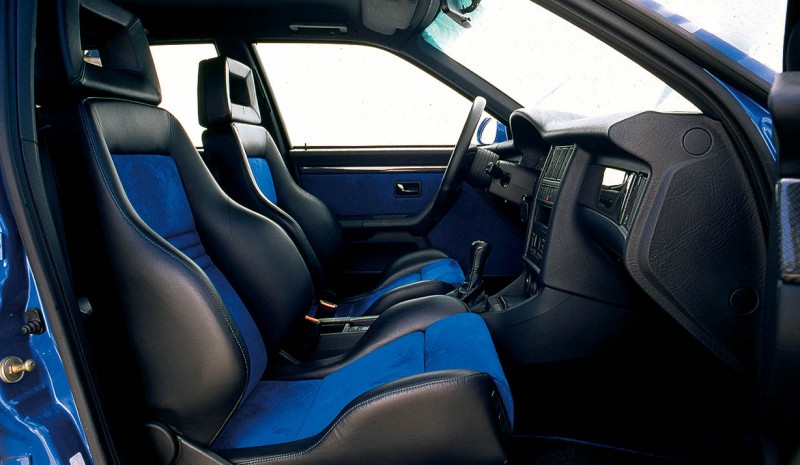 We continue to do a weekly review of the best cars in history and at the same time, the best tests conducted by magazines our publishing Motorpress Ibérica. In this case, we go back today October 1994. It was there for the first time when we could test the new Audi RS2. Under his body harmless and functional break hiding all necessary machinery to put the creeps to colder mortal: 315 hp turbo engine, and a tuned AWD Porsche sealing frame. Maybe it was, never better, the world’s biggest sport. This was the full test published in the Car number 201.

“Who would say that a family car could raise as much passion among the sporting public? The truth is to step outside the usual patterns always brings at least surprising consequences. And with him RS2, Audi has broken all the molds, giving birth to an extraordinary product with performance and dynamic qualities of true thoroughbreds. Not surprisingly, for completion, signing Ingolstadt has not gone through the branches and has sought the Collaboration insurance value: Porsche.

Therefore, in this case, cataloged as break the world’s fastest It is not the most significant. The really impressive begins when compared with most radical sports on the planet. Yes, we are referring to Porsche, Ferrari and others, who, using an expression chess player, leaving in check and, in some cases, checkmate.

In principle, it may be meaningless to mix the most prestigious sporting market with a familiar model. Nevertheless, RS2 has the family body, since the rest is all one competition engineering work. Because under the skin of this Audi 80 Avant a tuned chassis and an engine with a devastating power lies. 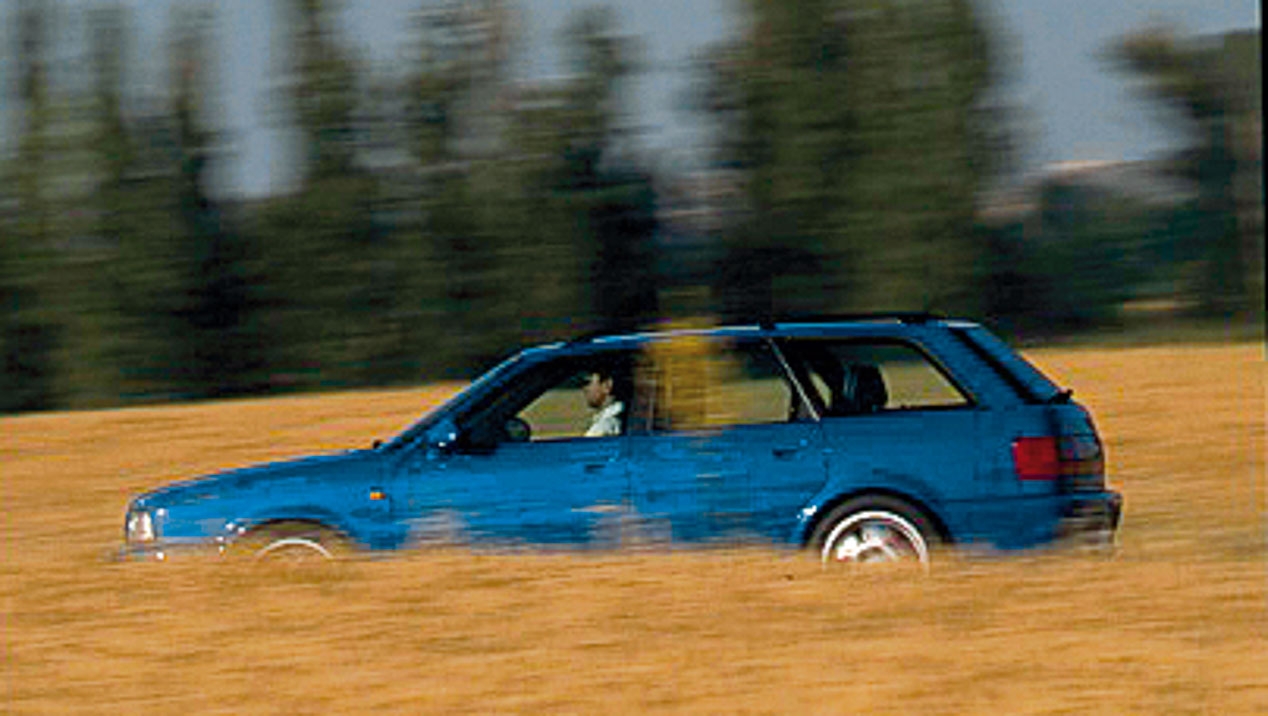 Although there are several aspects where Audi RS2 out brightly, is perhaps the motor which deserves special mention. The base corresponds to propeller Audi S2, but conveniently retouched Stuttgart facilities. Well, better than conveniently drastically retouched it should say brutalized. East five-cylinder turbocharged, in the S2 provides 230 hp, passes offer staggering 315 in the RS2. But most surprising is that this has not been considered at all increase the displacement. Why this engine offers the same 2.2 liter Audi S2, with identical diameter dimensions of stroke cylinders and crankshaft. This means that the specific power is a major market, with more than 140 hp / liter.

The evolution of power is achieved by a turbocharger and an intercooler larger and some intake and exhaust modified. Electronic management and the gap between intake and exhaust valves also have a new government law. At bottom, the engine of RS2 could be seen as an updated version of the successful 2.1-liter 306 hp which led at the time the Audi Sport Quattro, a propeller that provided the brand with the four rings many days of glory at the World Cup rallies.

Anyway, so strong technical solutions They carry several implications. On one hand, the power delivery is radicalized to extreme lengths, with a delay in input turbo considerable. However, when the overfeeding blows at full load you get to thinking that is rolled aboard a rocket from Cape Canaveral. From 2,800 rpm, and almost 5,000, the five-cylinder engine provides more than 40 mkg torque. Such power causes push so wild that comes to seem that under the scheme the engine almost nonexistent. In contrast, the changes made in the distribution possible to achieve surprising twist regimes to be a turbo propeller, which explains the maximum power is reached at 6,500 rpm, Stretching cutting to no less than 7,000 laps.

Certainly, an engine like this would be a problem for any transmission, but not for the Audi Avant RS2. The extensive experience of the brand in settings systems permanent all-wheel for sports saloons Quattro name It is felt positively. The RS2 has one of the most complex systems and effective transmission of the world with a Central Torsen ensuring proper distribution of power between both axles at all times. Also it has a rear differential with possibility to be locked manually to start low-grip conditions, and automatically disconnects when you exceed 25 km / h. This results in a excellent motor skills, whatever the state of the pavement or whatever abuse we do throttle. 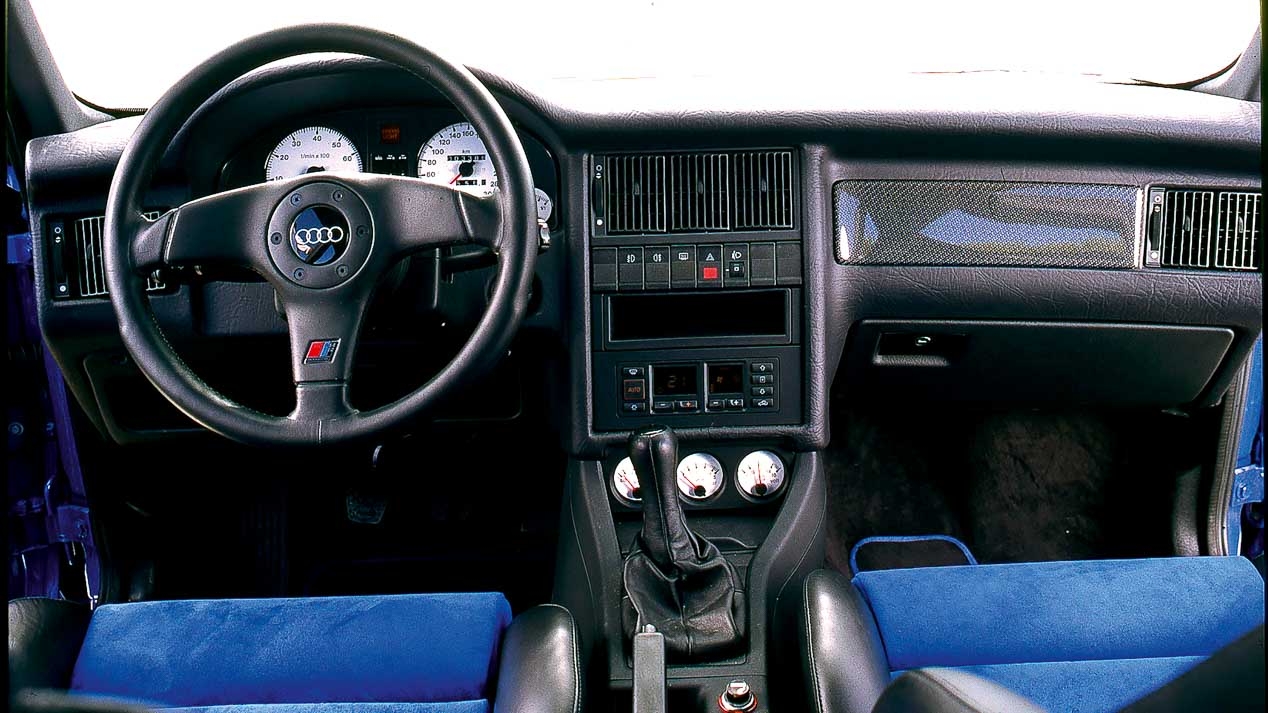 To this must be added a manual gearbox six relations well staggered, which allows you to maximize the awesome potential engine. The stopwatch is corroborated by figures that make blush many sports bells. For example, to pass from 0 to 100 km / h, the RS2 invests, According to our measurements, 5.29 seconds, ie half a second less than a whole Honda NSX, and 30 hundredths less than the car of fashion, BMW M3, or the novel Porsche 911 Carrera. To complete the play, the RS2 loosely exceeds 260 km / h speed, becoming the model Family fastest on the market. Also, if it were not for the tip it is self-limited, surely the RS2 Avant could run a little longer. Recoveries also leave the pride of many sports tatters: in 5th and going at 50 km / h, the RS2 reaches the first 1000 meters in just over 31 seconds, that is five less than the terror of the rallies of the World, the Ford Escort Cosworth.

All this still has much more merit if we consider that the RS2 Avant powerful is not particularly light. Much technological sophistication and equipment in which has not been spared nothing can be costly on the scale. Why our unit has reached 1,650 kilos. But the worst of this weight is its cast, as 1,000 kilos almost fall on the front axle. This affects the behavior, because in extreme situations and tight turns, sometimes difficult to register the nose in the rotation. However, this is the only fault we can blame. The RS2 is the head of the train cars, ie those who go on rails. Result virtually impossible to make out the path which is determined by the steering wheel. The cornering speed is impressive and accelerating should always take them to the AWD system works at full capacity, bringing the grip is impeccable. Only the absolute limit curves or addressing medium or fast to radio breakneck pace it could lead to all four wheels. And this is something that alters the pulse of anyone, despite security and balance that brings the car.

The undercarriages have been tuned in Porsche facilities, in Stuttgart. For this we used a lowered suspension and jerks spring-damper considerably tougher than any other model of Audi, including S2 variants. Hence it is not the most suitable for driving on rough roads, where more than one car will drop fillings. On the contrary, effectiveness and balance between comfort and stability with good floor layouts it is unbeatable. 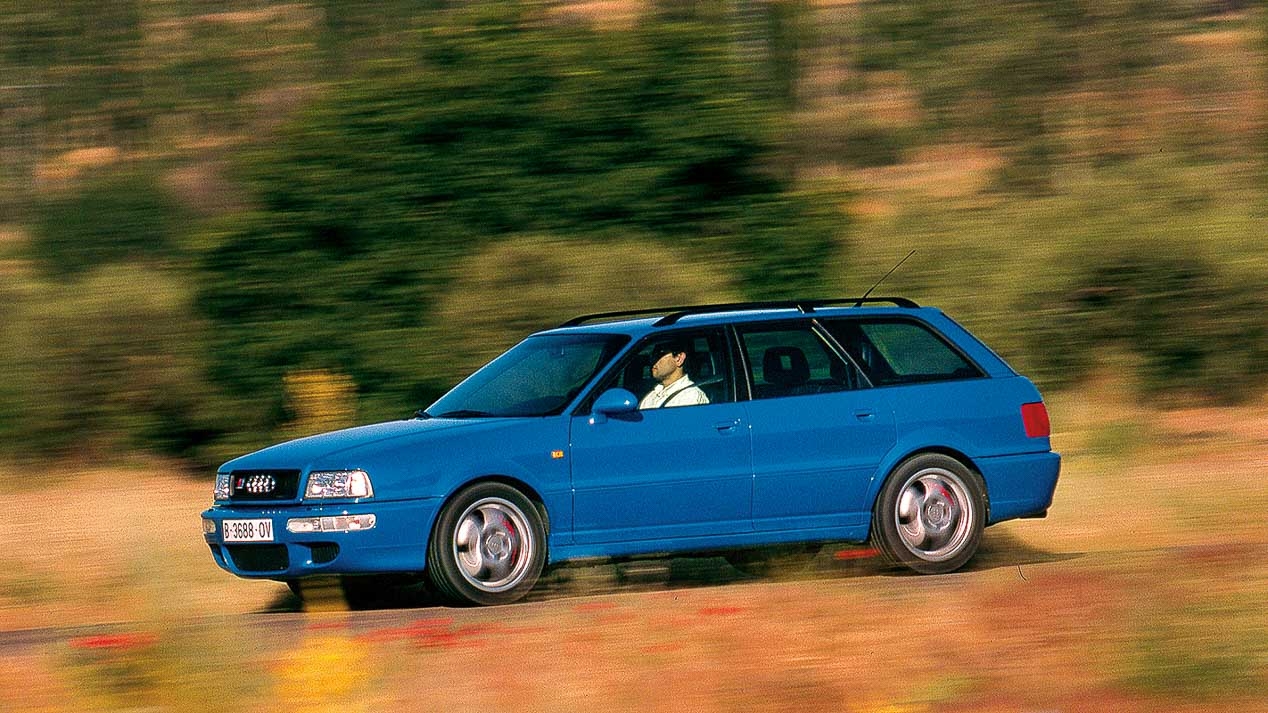 He Wheels and Brakes team is one aspect most striking characteristic of RS2. From the 911, rims of 17 inch diameter and 7 throat, can not hide the large disks. Powerful claws on them a four bowlers decorated in a striking red and stamped by the legendary German sports brand are located. Of course, strike praise the braking power of this apparatus AudiNeither the weight nor the speed, however high it may be, raise the slightest problem when stopping the car. Even fatiguing the brake seems a mission impossible.

He inside, meanwhile, does not clash at all. He sporty touch certain details fits perfectly into a luxurious interior and exquisitely topped. The magnificent seats Recaro They are upholstered in leather by its sides, while the center as well as door panels, have a type upholstery Alcantara, the same color as the body when it is blue RS (as in our case) or metallic gray. If you can not opt ​​for a leather he refused. Full instrumentation, including the three indicators voltmeter, pressure and oil temperature located in the central account console with white background, very attractive and spectacular at night with their lights, but that day dazzle a bit if it receives light directly.

As for the standard equipment, suffice it to say that we are facing a model that exceeds ten million pesetas. This means that it takes almost everything, from a powerful and efficient automatic climate control to airbags for driver or ABS. Perhaps the only element required to be paid to part is the front passenger airbag. The other options focus on more superfluous components, depending on the tastes and needs of each user. The truth is that for this price the existing supply in the market is very wide. With that money you can buy, from a pure sports two powerful station wagon or a large luxury sedan, or, why not, a sporting good and simple, resolving family model or … In short, you can make thousands of combinations . However, none have the charm of the RS2, which perfectly combines radical performance with a spacious interior full of virtues. Further, Only this car can you give great pleasure to leave with their mouths open to anyone who comes forward on the road (Which are many), and can reach anywhere boasts the fastest on the market or something as special as the world’s largest athletic, neither more nor less “break.

The best cars of the 80s