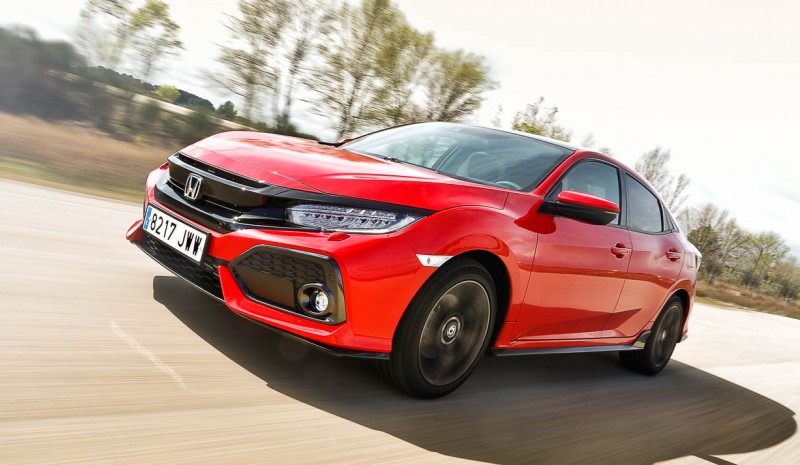 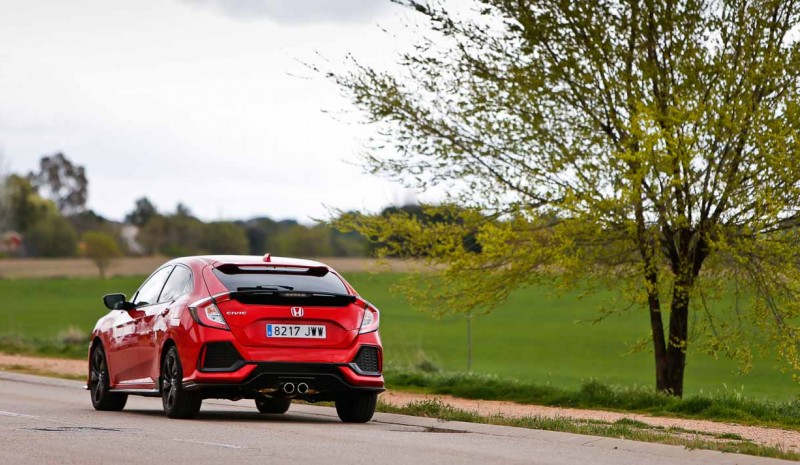 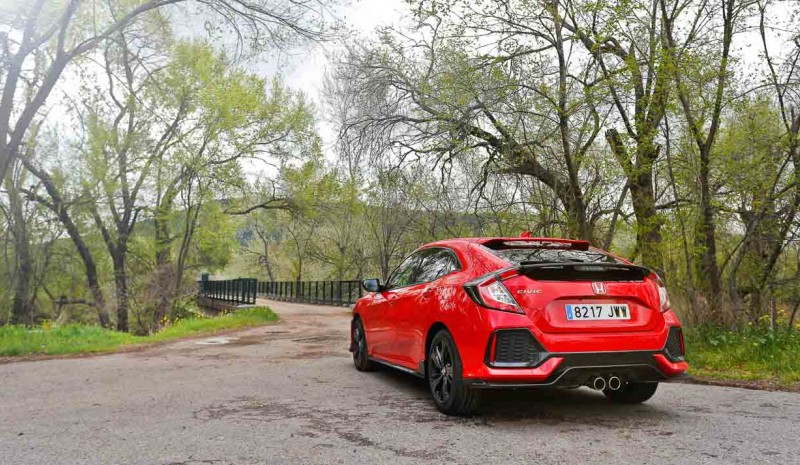 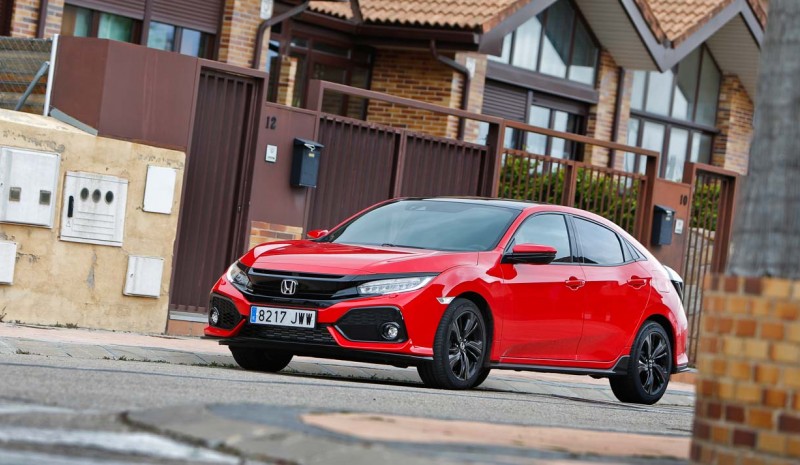 The new Honda Civic is more car in every way. For starters, Honda enacts a larger compact, It reaches 4.52 meters long, making it one of the largest models in the category Grows 15 cm in front of his predecessor and removes 25 cm to VW Golf, for example, but also wins 3 cm width and height loses 4, offering a more consistent image and a sharper silhouette.

Its exterior design clearly draws attention more on our test unit, with completion Sport equipped with a Plus- aerodynamic kit with wide diffuser in the rear bumper and double striking central exhaust. Honda has also thought of those who prefer a more discreet aesthetics, why in the Civic 1.5 VTEC Turbo can resort to Prestige finish presenting a more conventional rear, although this definition always little house with all traces of the Japanese model.

The interior also It has changed a lot. The eighth generation Honda Civic launched in 2006 was a groundbreaking design, both outside and inside -and had a certain continuity in the ninth-generation, highlighting the presence of a surprising dash and daring, with several screens at different levels for instrumentation and aesthetic unequaled among the models over 10 years.

Now, sitting in the tenth generation of Honda Civic we see that maintains a modern and technological air, though everything is neater. The driving position is very good. The seat is firm but comfortable, with good lateral support bench -the perhaps cut to some- and in its lowest position It puts us close to the ground. The settings let you feel at ease right away-the support is adjusted with lever-and everything is close at hand. Notice that has been given much thought to the driver. Even in the rear visibility, conditioned by a very laid back window, does not bother rear spoiler. 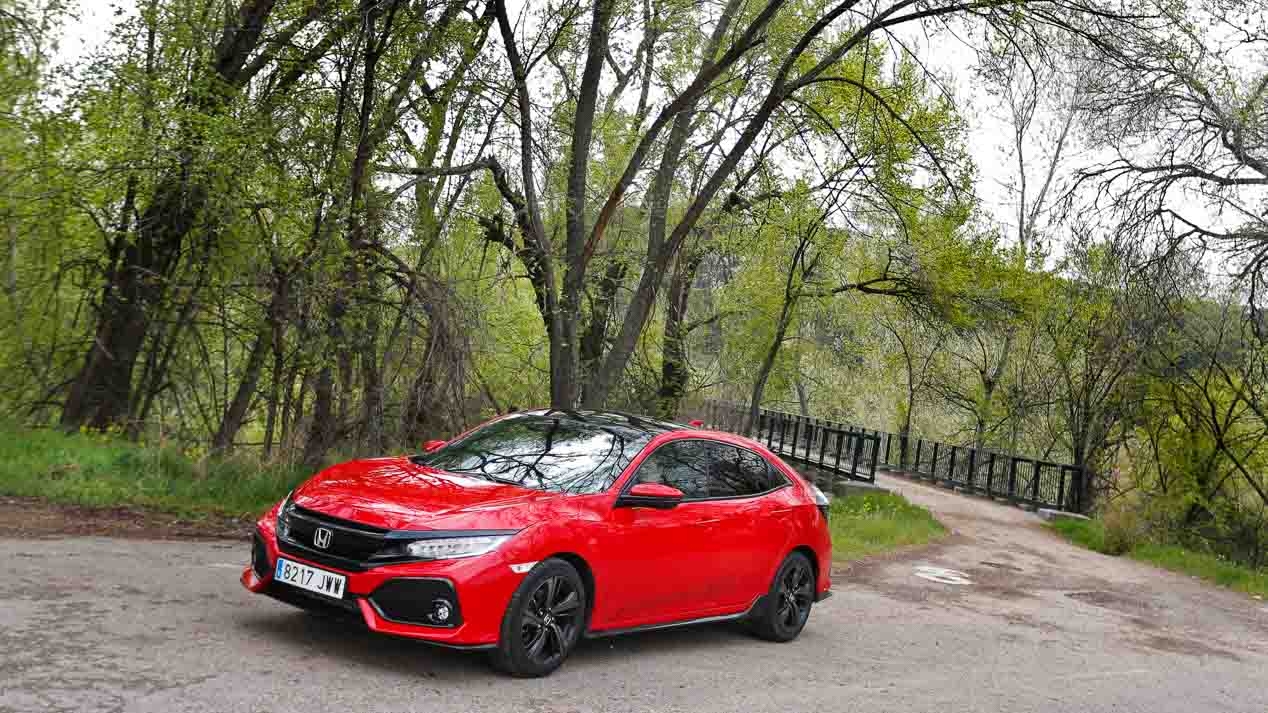 Interior materials convey quality in appearance and the care shown in the settings on the dashboard highlighting the decoration type carbon fiber. The instrument panel is easy to read and Central digital display, which houses speedometer and tachometer, you can varying design and customizable with various information, including a graph showing the operating pressure of the turbo. The multimedia system includes a screen 7 '', compatible with Android Auto and Apple carplay, which can provide access to the Internet, falling below system induction charging smartphone. It would not hurt menus handling various functions were more intuitive.

As for the passenger space, if we compare the new measurements performed by our Technical Center with the Honda Civic above, we see that no major differences, which means that this new generation it remains among the largest cars in its category. For example, highlight width in the rear, while the height to the ceiling in the second row is the least bright level, although the position of the seats It facilitates the accommodation of people taller, yes will notice the decline in body profile to access this area.

They not lacking useful details, because the cabin we find enough storage spaces, some quite ability to deposit those little things we use everyday. Data from our Technical Center give the New Honda Civic a trunk 445 liters, which also places him among the best in its class, but loses some capacity against his predecessor and cargo area no very regular shapes. In addition, the sidewalks of the rear seats are no longer rise, because the Japanese brand has decided to dispense with the peculiar Magic Seats offered by the previous model. 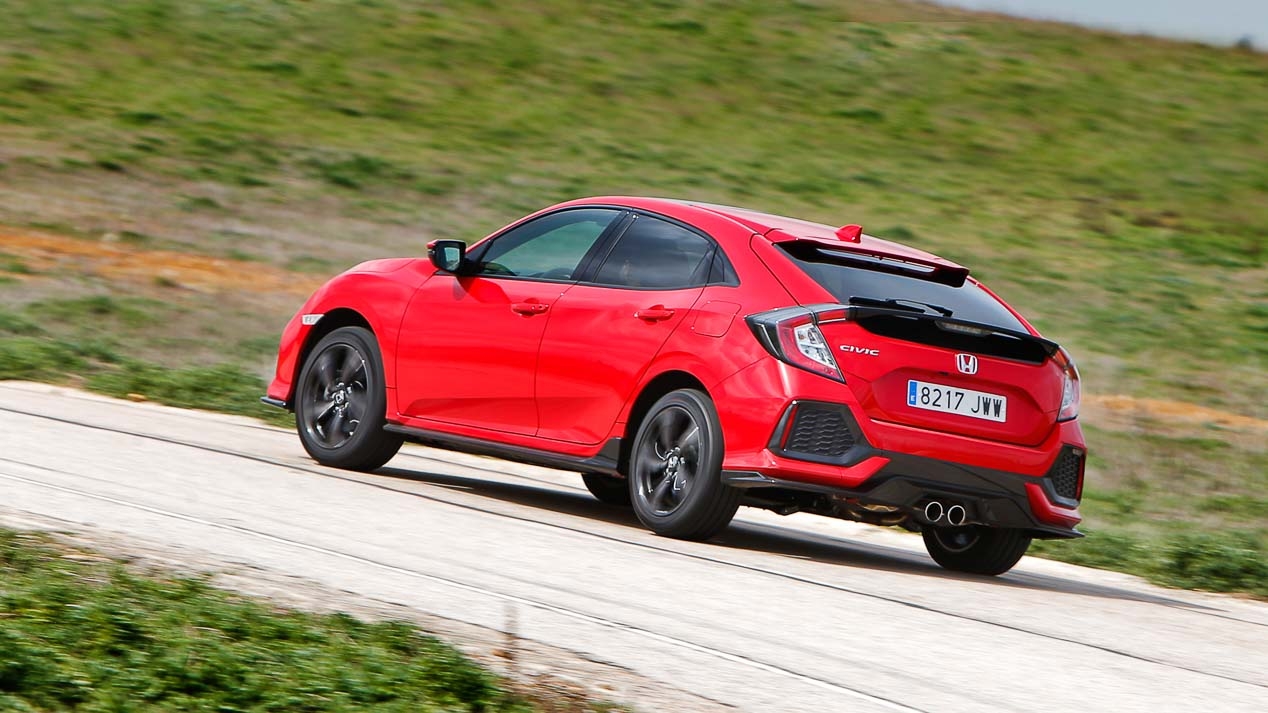 He 1.5 VTEC engine 182 hp It is another important development in the Honda Civic, as part of the new family supercharged gasoline engine. The key to this new mechanism is in its very low inertia turbocharger, which responds very quickly, even when few exhaust gases are generated, so that the maximum torque, 24.5 mkg, It is reached at 1,900 rpm, while direct injection is able to combine good thrust at low speed with a strong temper at high speed with the support of the Variable Valve Timing.

According to our measurements, The result in performance is impressive, as evidenced by the records achieved by the Honda Civic, which is able to pass 0 to 100 km / h in just 7.5 seconds, complete the first kilometer from standstill in 27.7 seconds and so meteoric advance any vehicle put "throw". Power delivery is quite linear and progressive, but from medium engine speeds, with sound change it also provides the exhaust system of the Sport Plus version, feelings soar and intensity does not yield to overcome 6,500 rpm and entering the area cutting. In short, an engine to enjoy a lot.

Honda Civic 1.5 VTEC Turbo: What a change and what brakes!

The enjoyment of Honda Civic 1.5 VTEC Turbo also contributes to a higher degree their six-speed manual gearbox. For starters, Honda seems adamant that the right hand does not release the change, not because we should jump up frequently, but because the handle is in a perfect position and the routes are short and very precise, inviting consistently make sporty driving. Surely it is addictive. 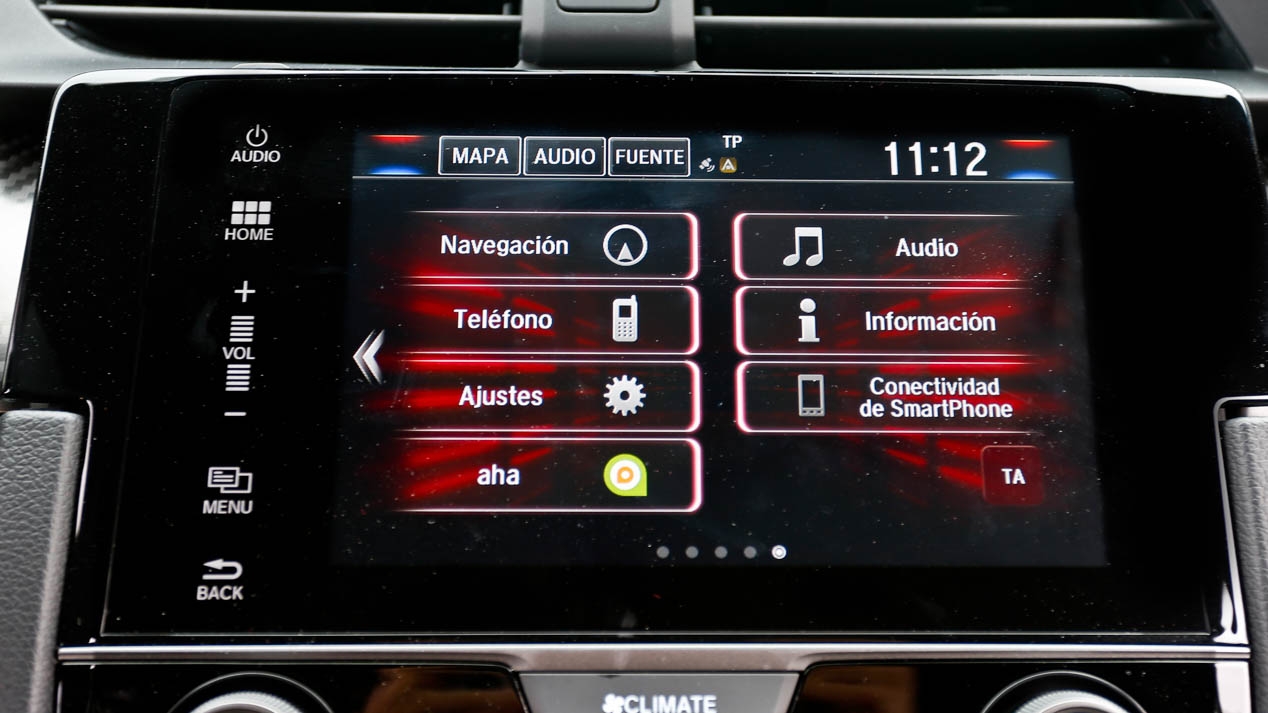 But there's more. The Honda Civic is based on a new platform -a 52% stiffer by manufacturer, and slightly and now it has a rear suspension. Driving is also perceived quality; It gives the impression that the Japanese brand has worked very seriously its chassis. You just want to find a winding road to take advantage of their agility and effectiveness in cornering, because their tendency to understeer is negligible and the rear helps the Civic feel very poised on the tarmac and without electronic aids take an unwanted by the driver stage. Touch and speed of management also add when looking for a high rate, and the mordant brake is amazing, managing to stop from 140 km / h, with tires 235/45 R17 Michelin Primacy 3 at the same distance -66 meters- they would a BMW M3 or Porsche 911 Turbo, there is nothing.

The Honda Civic Sport trim comes standard with a Plus variable hardness dampers, They are passing the sport mode by pressing a button on the center console next to the gear lever. The firmer Sport program is recommended if we shot for asphalt in perfect condition, otherwise accuse certain loss of comfort.

And after giving all that gives dynamic level, Honda Civic 1.5 VTEC Turbo rounds with his many virtues oil consume quite content since their Real average expenditure has been 6.6 l / 100 km when rivals like performance -this is closer Civic compact 200 hp from 180 hp move between 7 and 8 liters.