At last! Seat already has its SUV, the Ateca. And competition will not easy. To value, and we face a renewed reference, the new VW Tiguan. Which is better? 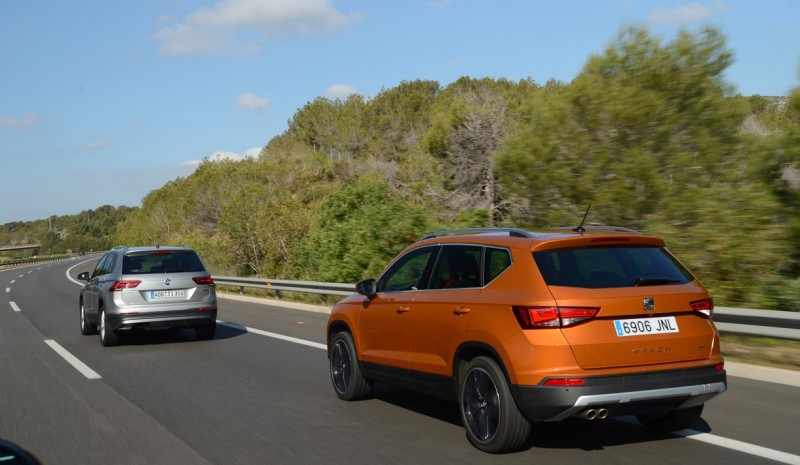 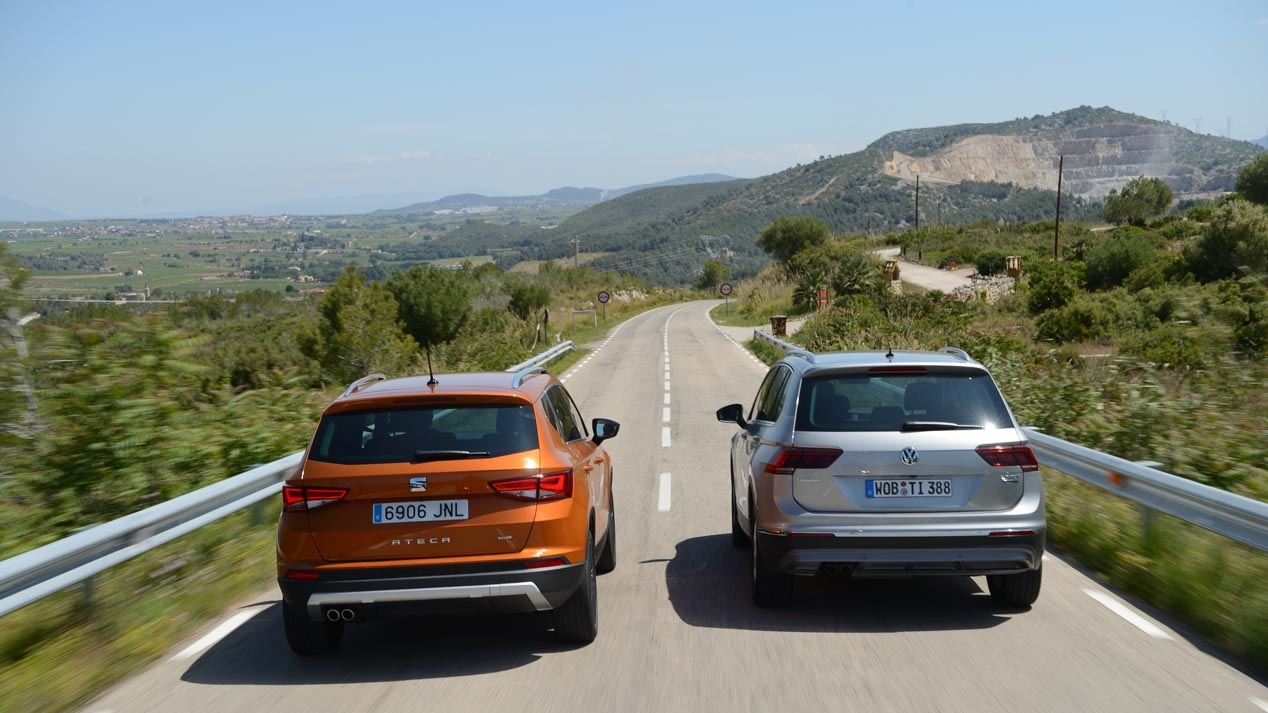 You know a pretty village of 2,000 inhabitants in the province of Zaragoza called Ateca? We have already visited, and not without charm. A thirteenth-century church, a magnificent square with a building of great architectural value that hosts the town hall and the Jalón River, which flows through the village winding. As well We asked residents what they think about their new neighbor wheel, Seat Ateca, but we’ll talk later. the mayor probably already know perfectly well that You can project the name of his people on the ground around the world thanks to ledes inserted in the mirrors of the first SUV Seat. But the duel comparative Ateca now we face for the first time, exclusively, not waiting for us there, but in Barcelona. A few days ago we could face the leader in sales, Nissan Qashqai, now playing in front of the SUV class benchmark: a VW Tiguan which also debuts new generation.

So we started our comparative duel through the streets of Barcelona. The key question was: You Are Ateca Seat a true rival for selling like his brother platform, he Volkswagen Tiguan? Visually highlights the robustness of both. In this, finishing Volkswagen gives a serious look reminiscent of the Touareg. For its part, the Seat It has an angled design that we will have to get used to.

By opening doors and trunk, the biggest difference between the two models can be seen quickly: the space in the rear. He Volkswagen Tiguan, with their 4.49 meters long and fine equipment, offers a more than acceptable legroom that can be extended by 18 centimeters over the rear row of seats is sliding. It varies to the same extent size trunk, no way from 520 up to 615 liters and reaches a maximum volume of 1655 liters by folding seats. Meanwhile, the trunk of the Seat Ateca, 12 centimeters smaller in length, offers ranging from 510 liters (485 in the wheel drive versions) up to 1,604 (1,579 if 4×4 version). However, the interior of the Seat is also very careful and it is nothing narrow. Even those who are taller than 1.90 meters will be comfortable in their rear seats.

The robustness of adjusted sports seats Ateca Seat It is due to driving style. being 100 kg lighter and 6 centimeters lower that he Volkswagen Tiguan, the Ateca defended very well in the corners, steering response is more direct and understeer makes it much later than the Tiguan. Despite the option to equip 19-inch tires are fair- though Madden countless potholes that we are, but faces without excessive shaking. The Volkswagen Tiguan behind him unfolds in a more comfortable way thanks to its suspension, tracing the curves with great aplomb and in Sport mode, while the adaptive suspension … although to a lesser extent intervening.

As originally front-wheel drive car, he Ateca Seat he uses four-cylinder engines of up to 190 hp, among which it can be expected to 2.0 TDI 150 hp whether the defendant. The Diesel engines with a maximum torque of 34.6 mkg, impresses in the two test cars, two wheel drive, very smooth running. A note regarding 4×4: It comes with a standard coupling multiple disc electronically controlled, Haldex very effective 5th generation.

Seat had absolute freedom to include in its new SUV Ateca general technology Volkswagen Group. Nonetheless, Some extras are not available here, such as head-up display system (Projection data in the windshield), fully digital instrumentation or adaptive suspension, which could alienate the Spanish car this new Volkswagen Tiguan. 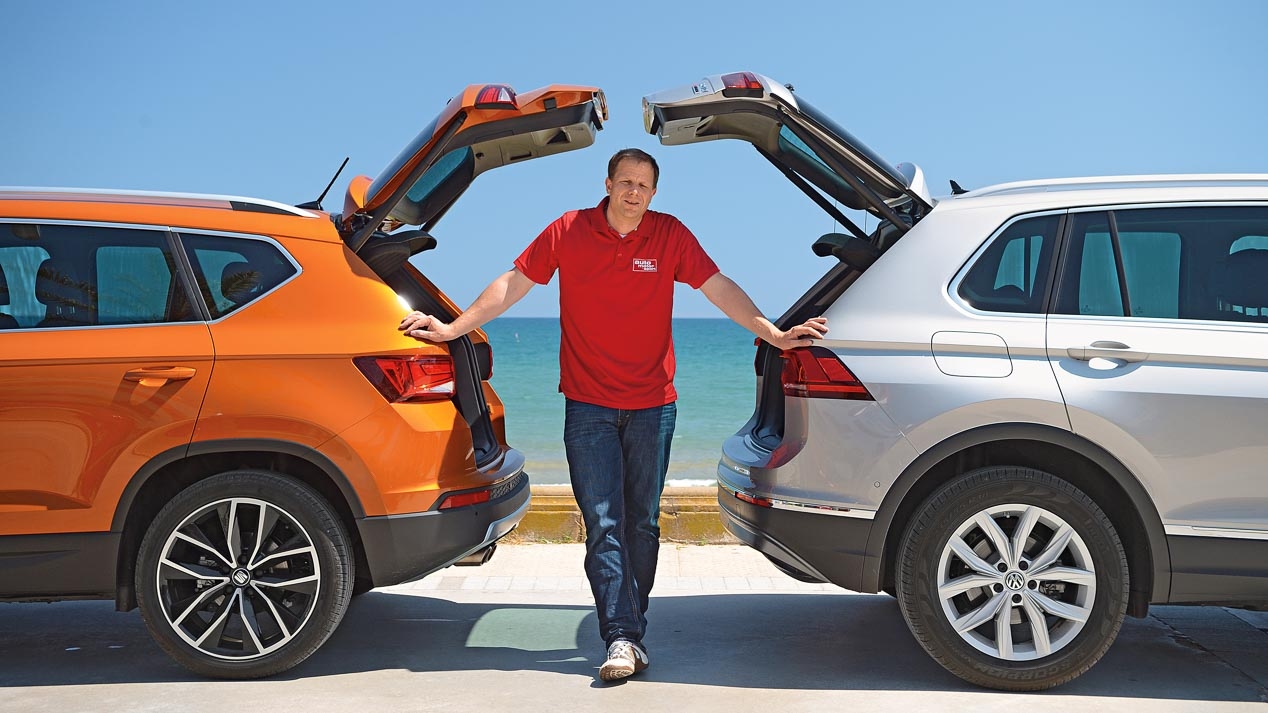 The advantage of the absence of these elements, not exactly cheap, is to achieve a more competitive price than in Ateca Seat of the 19,900 euros version 1.0 TSI 115 hp, also making it the first SUV of its kind to have a 3-cylinder engine. That is, it costs more or less the same as the Kia Sportage and Nissan Qashqai. The Volkswagen Tiguan, however, part of the 25,975 euros (Version Top Access 1.4 TSI 125 hp) and, if we compare the prices of both equipped with the same engine 1.4 TSI 150 hp both offer, it is up to 2,825 euros more expensive than the Tiguan Ateca. Yes, versions and top end, the most expensive Tiguan -190 hp 2.0 TDI with DSG and all-wheel drive is offered Highline- finish a price lower than the upper Xcellence Ateca Seat, with similar equipment, which now stands at 44,000 euros.

Ateca Seat It is now in segment the model of those seeking a confident and sporty SUV. And works. Although Ateca moment can only be seen in classrooms or online store until September start delivering its first units, and there are over 5,000 reserves SUV even in Germany. We do not know if Ateca’s neighbors have already placed your order … although that was promised when we visited his people.

In short, we can conclude that the Ateca Seat differences with the Volkswagen Tiguan sand make precisely in their strengths: is smallest external length but very spacious inside, cheaper and much more agile making it more fun. And it has the firm aim to please all customers. The Ateca Seat, definitely, It will hit strong and have good reception, but you must also fight models like the CX-5, the Qashqai or Hyundai Tucson, much tighter to their prices and also very good SUV.

We tested the most powerful Seat Ateca

Ateca Seat "mini": Ibiza will be the SUV