Both the DGT and the Civil Guard have been published in Social Networks the exact speed at which radars jump to fine you. Attentive to every detail.

Profiles Twitter of the guard Civil (@guardiacivil) and DGT (@DGTes) have posted throughout the day today exact speed which jump radars, ie the figure by which They are activated and "hunt" the offending vehicle.

This exact speed which jump radars our roads It varies official limit in which are installed, that is, they do not apply the same scale or speed range They laying activated. 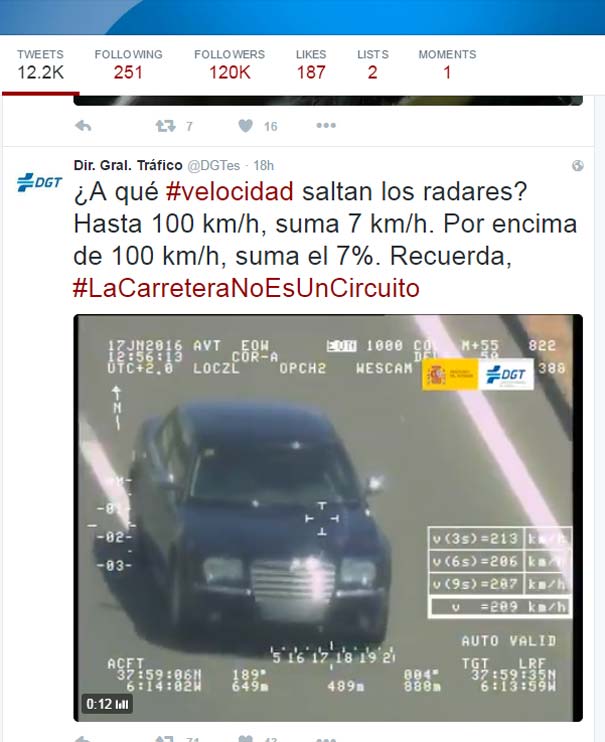 According to the publication widespread in social networks therefore the DGT as the guard Civil, when the road limit exceeds 100 km / h, that is, the particular limitation is 110 and 120 km / h, the speed cameras are activated in each case when the offending vehicle exceeds 7 percent the edge of the road on which you are driving.

Thus, in areas of highways and highway with a time limit (the limit drivers are advised by information panels) to 110 km / h, The radar will be activated 117.7 km / h. In all other motorways generic limit 120 km / h, Drivers will be punished if the radar picks circulating 128.4 km / h.

In the terse messages broadcast on Twitter by DGT and the guard Civil, not specified whether this maximum speed jumping the radar belong to fixed safety cameras, mobile safety cameras or radars section.