Bigger, lighter, and above all, much more
refined. The new Alhambra deepens its
large minivan concept. Size and
also for solutions, and with an ingenious
interior configuration for up to 7 seats and doors
sliding. Seat comes the most familiar ... and, simultaneously,
the VW. 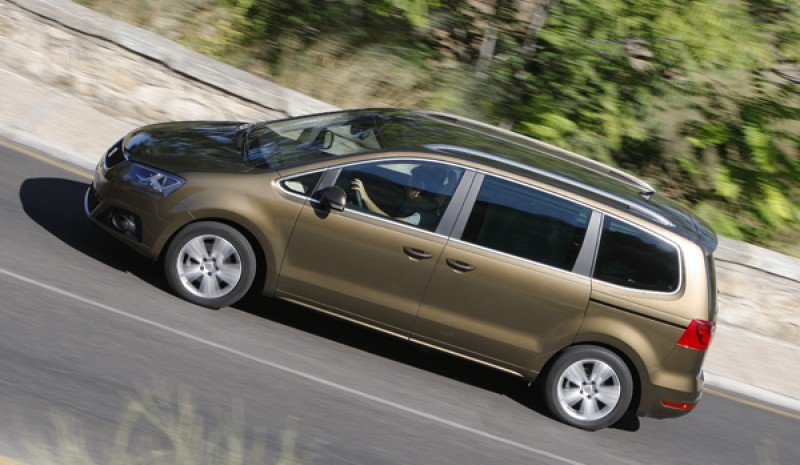 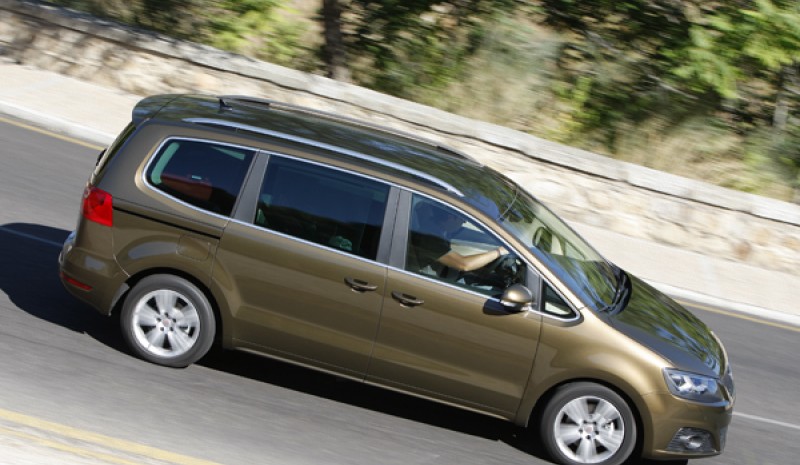 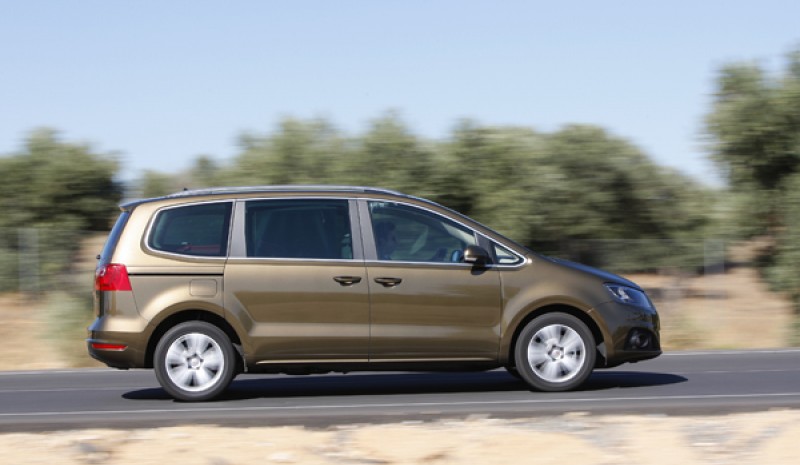 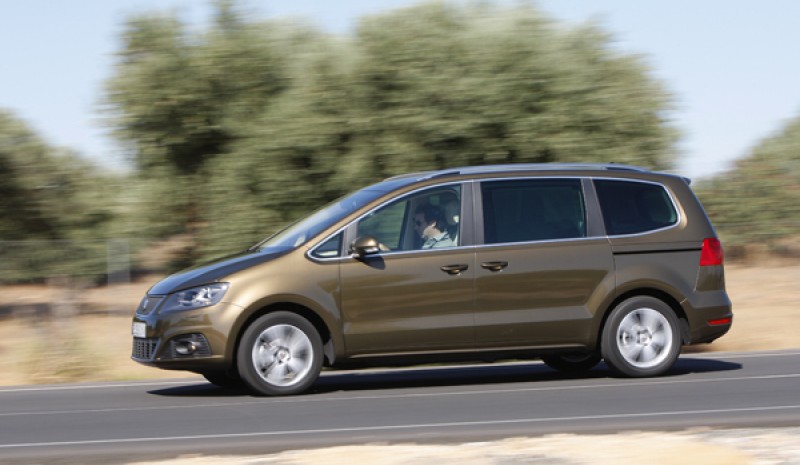 Maybe your front point the new design shaped arrow and promotes Spanish brand in all his pitches, but then to indoors ... is a Seat? Hard to believe. It is the only model that does not leave Martorell but is manufactured at the Volkswagen plant in Palmela (Portugal) on the new platform MBQ group, which also soon will start a renewed Volkswagen Sharan we have already conducted. Change logo and same car, a philosophy that takes in the segment. He did before, and Notice the clonic Citroen C8 / Peugeot 807 / Lancia Phedra. Good or bad? Some might accuse Seat to give up that very sporty personality that print from the factory in Barcelona. As in Ibiza or Leon. Of that claim and, here, suffers because the Alhambra Piloted not even offer the sport suspension and body mount the Sharan yes, practically only difference between them regardless of the configuration. And is that the Seat Alhambra is standard with 5 people (7 in option), VW while waiving the first having only 6 or 7 seats. Same distinction made to separate its Ford S-Max and Galaxy, although they use the approach itself is clearly marked. However, for a minivan like the Alhambra, Seat is benefited by inheriting ride comfort and superior production quality to its range. Just enough in the family category par excellence.

The base course is very good. If until now the Seat Exeo (as previous generation Audi A4) Seat marked on the border between generalist and premium manufacturer, now the Alhambra redefine that position before shooting. Not that the former was bad car, but started at a disadvantage against rivals in comfort, flexibility of use and allocation. It's over. 22 cm more in length that make it difficult, yes, finding parking (such as a Renault Grand Espace, and even a Kia Carnival) and 8 cm extra battle, true that the Alhambra improvement in space; but gains in functionality: sliding doors providing access (not swing), the second row of seats and sliding separate 16 cm (Formerly 10), more storage drawers holes even under the floor ... and easier to mount and dismount seats, even with a single movement and the optional third row suitable even for adults (753 €). And always so well flush with the boot floor to bring them down, without (or ability) to extract their heavy banquettes as its predecessor. Yes, seeketh a configuration 2 + 2 + 2 must look to the next Sharan. Where once lost to rivals, he wins today.

The Seat Alhambra is exceeded in space and use thereof, although more surprise in comfort. With careful ergonomics (the driving position is lower tourism- -type, the left footrest wider and has already parking brake button), softness and comfort make it fast an appearance. From a 'basic' engine 2.0 TDI 140 hp very refined from the start (first the most demanded version that we go and, sure,), a new electromechanical steering sweet guided but informative enough (nothing to do with Citroen or Kia) or flexible suspensions asphalt absorb well despite its large flat tires 225/50 R17 rigid housing (the Alhambra does not even have repair kit). And, above all, with high isolation, with a sound not only very reduced rate compared to previous generation penalized, but positioned for prominent body in values ​​close to a BMW 5 Series or Mercedes E Class, saloons and representation ... Is a Seat?
Next to space, comfort is the strong point of the new Seat Alhambra; not so much, however, agility. Wheeler quintessential fast tracks, the Alhambra moves well on the road but already supports much volume is not masked. Nato understeer, the soft front end opens soon in the line and curve body sways, although the rear axle goes unnoticed (Except heavy braking, which is more nervous), whcih a model of such dimensions and inertia. It should therefore be dosed in these plots, though his good motor exceeds the average. Let's say, dynamically, would be positioned intermediate the slower C8 and Grand Espace, and the most direct S-Max.
Something on the road, and much in consumption, now at the Alhambra sum reduced weight, cut to 50 kg over its predecessor despite the larger and equipment. Thanks also to all versions carry stamp Ecomotive, with Effective Start / Stop system, energy recovery in braking and long transmission developments (although the strong 2.0 TDI with 140 hp can with them, it is especially full load not lose sight of the manual transmission standard for overtaking with good safety margin), its just 6.8 l / 100 average expenditure marked a clear reference in the segment. And his powerful equipment, and complete with 7 airbags (including knee) or ESP from the Basic Reference version, but recommended the upper excelso Style by riding exclusively practical electrically operated doors and tailgate, plus sophisticated bi-xenon headlamps with automatic control of lights, rear-view camera or guided parking system. Definitely, Alhambra that will impress one who demands an ingenious and comfortable large minivan ... and disappoint him looking at some sports plus plus. Note here that the S-Max. Is it then a Seat? The logo says so.

- Not easy to find great weaknesses in the new Alambra. Only in performance, with an engine that yes prepared for a minimum consumption, does not take advantage his rivals. But in space, functionality or performance, the performance of the new Alhambra is excellent.

-To the familiar cut Alhambra, the performance of the 2.0 TDI sufficient. However, is not a bullet and long developments are felt in recoveries and overtaking. In the middle of the segment.

-Above all, the new Alhambra It surprised by comfort. Much improved softness inside and sit on command, materials and tread. It imposes especially high isolation gear, aspect that failed before.

-for active, rationality is imposed on a model of such inertia, but with common sense driving easy, it reacts smoothly and brake with correction. Passive, new knee airbag and complete standard equipment

With plenty of space and large family possibilities, their prices are in line with rivals, although, promotions, veterans C8 or Grand Espace should cost less.