He Nissan Terrano new image of pure abandon its SUV we knew to become a new alternative SUV, larger than the Qashqai and a step below the Murano (As pure 4x4 vehicles will continue to be offered the Pathfinder and X-Trail). Yet we know much of the details that will bring this new generation as well as official images.

So far, we know that Production will begin next August 20 in the factory that Renault and Nissan have in Oragadam, Chennai (India). There other models like the Micra, the Evalia ... or Renault / Dacia Duster with specifications for the local Indian market and for the UK (both with RHD) are manufactured.

Precisely the new Nissan Terrano will share platform and genes with Duster; yes, with sleeker and exterior design details, both the body and the interior, higher quality. In the renewed Terrano no longer prevail square and rough lines as the previous generation or the same Duster, trying to pull away from the latter image having low cost vehicle. 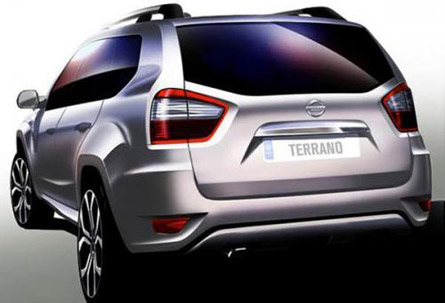 Initially, the Nissan Terrano will feature Duster same mechanical range, what in Spain sold a only 1.6 petrol engine with 105 hp, and the 1.5 dCi Diesel Nissan-Renault alliance 90 and 110 hp. It remains to be seen whether Nissan opts for a more powerful for the Terrano for the European market mechanics, such as the new 1.6 dCi 130 hp.

With the new generation Nissan Qashqai just around the corner -prevista end of this year or early 2014, marketing the new Nissan Terrano it is scheduled for next November.